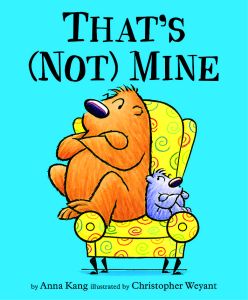 When I saw that super-talented husband-and-wife team Weyant and Kang had produced a new story featuring our favourite fuzzy creatures, I knew my boys would flip for their own copy.

That’s (Not) Mine had a lot to live up, following on from the hugely successful You Are (Not) Small, but fear not – it’s every bit as good as the first.

I can’t decide whether it’s the hilarious illustrations or the straight-to-the-point text that makes these books work so well…I think it’s the combination of the two, with each element lending humour to the other. Whatever it is, Weyant and Kang have developed their own winning formula, and my kids love it.

The illustrations are bold and bright, and Kang has the ability to put a great amount of emotion into her drawings. Oh, how we laugh at the facial expressions of the fuzzy creatures!

In That’s (Not) Mine, the two fuzzy creatures argue over a chair, using all sorts of tricks to claim ownership. Eventually, they realise that sharing is much nicer than fighting, and they are back to being buddies.

Currently in our household, our four-year-old loves to play with his big brother but it doesn’t always go his way; this book arrived at the perfect time, as we’ve been able to use it as a subtle reminder that sharing is cool, and that sometimes, you have to play by someone else’s rules before they will play by yours. This is a great tool for teaching kids the intricacies of sharing and compromise, all without them realising what you’re doing!

Thank you to Hachette NZ for providing our review copy.