If She Did It – Jessica Treadway (Published by Hachette – March 2015) 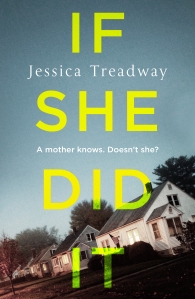 What if you began to suspect your child of an unspeakable crime?

You know those novels that you really enjoy but really irritate you at times? If She Did It was one of those novels for me. It took me quite some time to feel hooked into the story, and if I wasn’t reading for review purposes, I might have given up after the first few chapters. And if I had, I wouldn’t have passed that magic point where suddenly, I was addicted.

It took me a long time to warm to Hanna, our storyteller: mother-of-two, wife, widow, victim. I don’t know why…I completely understood her reluctance to believe that one of her own children could have been responsible, in any way, for her husband’s murder (as a parent, it’s our duty to believe only the best about our children, despite all the apparent warning signs, right??), and that made her so much more real and believable, but I still didn’t like her for a while. Three-quarters of the way through and I started to like Hanna, and by then end, I liked her a lot, because she believed in her youngest daughter for as long as she did.

It was easy to put myself in this position, to think like Hanna and refuse to believe that my children would be capable of anything so horrific. It could be quite a confronting read for parents of older children, forcing them to ask themselves what they could or should be doing or have done differently.

Interestingly, two of the more minor characters caught my eye early on: Hanna’s perfect oldest daughter Iris, and her neighbour’s son, Emmett, who is portrayed as a bad kid, but really isn’t.

I liked that the story flits between the present where Joe, Hanna’s husband, is dead and her daughter’s boyfriend wins an appeal after being convicted of Joe’s murder, and the past, where Hanna is the only one who has faith in her awkward, odd youngest child, Dawn. Instead of telling us straight away what happens the night Joe and Hanna are savagely beaten in their home, we are fed snippets as Hanna recalls the attack, and as she remembers, puzzle pieces fall into place with startling clarity. The reader is always two steps ahead of Hanna, and this can be both frustrating and exciting because you’re just waiting for Hanna herself to get to that point too.

Despite initial misgivings, I enjoyed If She Did It, and I’m glad I persevered.

1 thought on “Book Review: If She Did It”