We stopped in Santiago for one night on our way from Santa Cruz to Mendoza, and another two nights at the very end of our South American adventure.

On our first visit, I wasn’t at all impressed. It was hot and dusty, and after spending time in smaller, quieter, cleaner places, I felt a little agoraphobic. I also came away harbouring two bruises from our short visit, which will come as no surprise to those of you who know me and my clumsy tendencies. One bruise was on my head (luckily hidden by hair), gained by walking into a metal signpost (possibly for a taxi or a bus – I don’t know…I didn’t see it…obviously); the other was on my foot, from a large tree branch falling on us while sitting in a park, just five minutes after bruise numero uno was obtained.

However, I was prepared to give Santiago the benefit of the doubt, and we went back with an open mind. 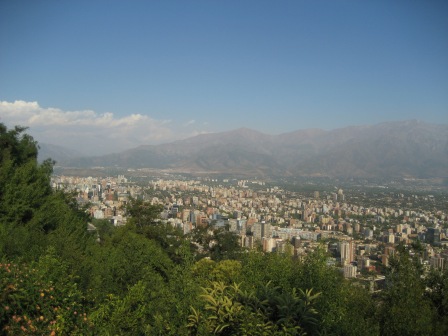 As it turns out, on our return I managed to trip over some mammoth obstacle and ended up with a wrenched shoulder, a badly torn hand (full of lovely Santiago pavement grime) and a bruised knee. I spent a sleepless night worrying about the baby, but in the morning, he was kicking about as usual. I should probably blame my general clumsiness and the shift in my centre of gravity , but it was hard to see past these incidents as the city being out to get me

There was nothing we specifically wanted to see or do in Santiago; we probably wouldn’t have even gone if we hadn’t been flying out from there. We decided to stay somewhere fancy and just relax for the last two nights of our amazing trip. Our 5-star hotel was out of the city centre in a very swanky neighbourhood (Louis/Georgio/Salvatore/Hermes, dah-ling?), and we spent a lot of time just chilling out by the pool or in our air-conditioned room.

Tall climbed up Cerro San Cristobel, which is essentially a big hill with a statue of the Madonna at the top; he said the views of the city were pretty good and not too smog-obscured. That’s one thing we noticed immediately about Santiago – the smog.

We went on a hop-on-hop-off bus tour on our last day, but it was too hot to go wandering, and as most museums are closed on Mondays, we spent our time seeking shade and downing ice creams like there was no tomorrow. And there wasn’t…well, not for us in South America, anyway.

At 11pm, we were buckled into our seats on a plane bound for Auckland. I was sad to be leaving South America, and to be putting our travelling days to rest for a while, but the prospect of going home, of seeing our families, of having a kiwi Christmas, and meeting our baby made my stomach twinkle with anticipation.

1 thought on “Tales of Travel: Santiago”